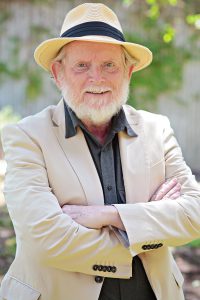 Michael M. Rea, a passionate reader and collector of short stories, founded The Rea Award for the Short Story in 1986 to be given annually to a living United States or Canadian writer whose work has made a “significant contribution to the discipline of the short story form”. The Rea Award is unique in that it is not given for lifetime achievement, a collection of stories or for a writer’s body of work but rather for originality and influence on the genre. Cynthia Ozick, the first winner of The Rea Award, said, “By now the Rea Award is an indispensable American institution and a coveted American prize. It is our little Nobel – little only in the sense that it addresses the short form. ”Michael M. Rea died in the summer of 1996. Sponsored by the Dungannon Foundation, named after Rea’s Irish ancestors, The Rea Award continues under the direction of his widow, Elizabeth Richebourg Rea.

Richard Bausch is a shining light in the small group of great American story-writers.  His stories, published in many languages and widely anthologized in our own country, bear out the directive that literature should renew our sensuous and emotional lives and foster a new awareness in its readers.  Bausch’s stories, solidly, eloquently in the realistic tradition shared by O’Connor (Frank and Flannery). Welty, Cheever and Yates, are ever in search of the heretofore unsayable in human affairs.  In doing so, they are incisive, surprising, felicitous, various, often mirthful, and unstintingly about those subjects we can not afford to ignore: matters of life and death, yes; but chiefly matters of life sustained.

Richard Bausch is the author of eight collections of stories and eleven novels.  His story collections include the recently published Something is Out There, The Norton Anthology of Short Fiction, The Stories of Richard Bausch, Someone to Watch Over Me: Stories, Selected Stories of Richard Bausch, The Fireman’s Wife, and Other Stories and Spirits, and Other Stories. His novel, The Last Good Time was made into a feature-length motion picture, directed by Bob Balaban, starring Armin Meuhler-Stahl, Maureen Stapleton, and Lionel Stander, released in April 1995, and Peace, published in 2008, was awarded the 2010 Dayton International Literary Peace Prize.

Richard Bausch has won two National Magazine Awards, a Guggenheim Fellowship, and a Lila-Wallace Reader’s Digest Fund Writer’s Award, the Award of the American Academy of Arts and Letters, and The 2004 PEN/Malamud Award for Excellence in the Short Story. In 1995 he was elected to the Fellowship of Southern Writers. In 1999 he signed on as co-editor, with R.V. Cassill, of The Norton Anthology of Short Fiction.  Today Bausch remains the sole editor of this prestigious anthology after the passing of Cassill in 2002. In February 2012 Bausch received from Centenary College, The John William Corrington Award for Literary Excellence.  Bausch is currently with The Writing Program at Chapman University in Orange, California.

While Bausch’s novels have been met with critical acclaim, his mastery of the short story form is arguably his greatest literary achievement. In addition to his published story collections, his work has appeared in The Atlantic Monthly, Esquire, Harper’s, The New Yorker, Narrative, Gentleman’s Quarterly, Playboy, The Southern Review, New Stories From the South, The Best American Short Stories, O. Henry Prize Stories and The Pushcart Prize Stories; and they have been widely anthologized, including The Granta Book of the American Short Story, and The Vintage Book of the Contemporary American Short Story. The Modern Library published The Selected Stories of Richard Bausch in March, 1996, a distinction rarely accorded to a contemporary writer.

In addition to The Rea Award for the Short Story, the Dungannon Foundation also sponsors Rea Visiting Writers and Rea Visiting Lecturers at the University of Virginia, and Selected Shorts: A Celebration of the Short Story at Symphony Space in New York City.