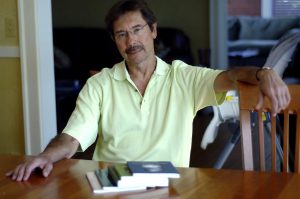 Stuart Dybek was born in 1942 in the Southwest side of Chicago. Raised in Chicago’s Little Village and Pilsen neighborhoods in the 1950’s and early 1960’s, he writes about the ethnic changes in these neighborhoods at the time of their shift from being populated by working class Poles and Czechs to becoming primarily Hispanic areas of the city.

The first in his family to go to college, Dybek earned an MFA from the University of Iowa where he won the Academy of American Poets Contest and was awarded a Teaching/Writing Fellowship. He also holds an MA in literature from Loyola University in Chicago.

Stuart Dybek has published three short story collections Childhood and Other Neighborhoods,The Coast of Chicago and I Sailed With Magellan, and twovolumes of poetry Brass Knuckles and Streets In Their Own Ink. His work is frequently anthologized and regularly appears in magazines such as The New Yorker, The Atlantic, Harper’s, DoubleTake, Ploughshares and The Paris Review. He has served as a guest editor and a contributing editor for several magazines and presses.

Dybek’s many honors include the PEN/Bernard Malamud Prize, a Lannan Award, the Academy Institute Award in Fiction from the American Academy of Arts and Letters, a Guggenheim Fellowship, two fellowships from the National Endowment for the Arts, a residency at the Rockefeller Foundation’s Bellagio Center, a Whiting Writer’s Award, four O’Henry Prizes and two Pushcart Prizes.

Currently Mr. Dybek teaches at Northwestern University as Distinguished Writer in Residence, anewly created appointment. He was a professor of English at Western Michigan University for twenty-five years, where he received the Distinguished Scholar Award. He has also taught as a visiting professor at Princeton University, the University of Iowa’s Writer’s Workshop, the University of California at Irvine, Northwestern University and the Warren Wilson MFA Program in North Carolina. For nearly ten years he has traveled to the Czech Republic to conduct creative writing workshops. Mr. Dybek is a member of the permanent faculty at the Prague Summer Program. Stuart Dybek lives in Michigan with his wife and two children.