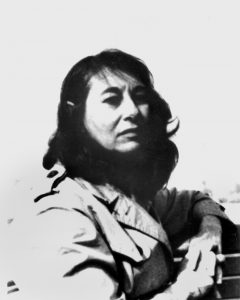 Gina Berriault was born in Long Beach, California on New Year’s Day 1926, the youngest of three children of Russian Jewish immigrant parents. “My father was mentor for my spirit,” she said in an interview for The Literary Review. “A freelance writer, he had one of those old, stand-up high typewriters. I began to write on that typewriter when I was in grammar school.” Her mother went blind when she was in her teens. In an essay for The Confidence Woman, Gina Berriault recalls her mother sitting by her little radio, listening to serial romances and waving her hand before her eyes, hoping to see it take shape out of the dark. “I was fourteen or so when the dark began to close in, and when I began to write did I expect to bring a shape, a meaning, even a reason-for being from out the dark?”

Gina Berriault’s stories have appeared in many magazines and literary journals, including Esquire, The Paris Review, Ploughshares, Harper’s Bazaar, Mademoiselle and The Threepenny Review.

She is the author of four novels, The Descent, A Conference of Victims, The Son, The Lights of Earth and three collections of short stories. The Mistress and Other Stories, The Infinite Passion of Expectation: Twenty-five Stories and Women In Their Beds.

She has been the recipient of a grant from the National Endowment for the Arts, a Guggenheim Fellowship, an Ingram-Merrill Fellowship, a Commonwealth Gold Medal for Literature, the Pushcart Prize, and several O’Henry Prizes. Women In Their Beds, published by Counterpoint Press in 1996, received the National Book Critics Circle Award, the PEN/Faulkner Award and the Bay Area Book Reviewers Award. She is the recipient of the 1997 Rea Award for the Short Story.

Presently, she lives in Northern California, where she writes full-time. She has one daughter, Julie Elena, to whom her books are dedicated.