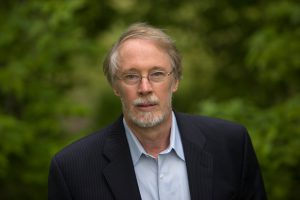 In a time when the worlds of media and publishing are prominently experiencing difficult transformations, and mediums such as blogs and personal Web sites have toppled traditional hierarchies of both control and perceived value, it might seem reasonable to think that if any literary genre is under threat, it is the short story.

The literary story, after all, is an art form that has long faced a struggle to survive in an industry that doesn’t judge (potential) books by their covers, but instead judges them —at least in many cases—on how well they will sell; what the return will be.

On the occasion of the 25th anniversary announcement of the winner of the Rea Award for the Short Story— it’s writer Charles Baxter—posed the issue of the short story’s survival in a digital world to Elizabeth Richebourg Rea, who administers the award established by her late husband, Michael M. Rea. His goal was to encourage the writing of short fiction by honoring a living U.S. or Canadian writer who has in Mr. Rea’s words, “made a significant contribution to the discipline of the short story as an art form.”

“I don’t’ think the short story is going out. As long as there are writers who care about writing, that will be a medium that will last,” Ms. Rea, who retains the home in Washington she shared with her late husband, said as part of the same conversation in which she noted that The New York Times no longer announces the winner of the Rea award in print.

After mulling it over, we both decided that the short story was the perfect literary art form for the digital age. For one thing, it’s implied brevity makes it something that can naturally be experienced on mobile devices, and during interludes in the types of schedules that folks armed with mobile devices and multiple computers tend to have.

“The short story form actually fits quite well in this fast paced digital age, so I do think it will survive the test of time,” Ms. Rea added in a follow-up e-mail to our conversation.

Perhaps the best argument for its survival doesn’t need to bother with contemporary concern with “platforms” and how content is presented. Short stories, when rendered by an artist, have innate appeal, beauty and power.

“It’s the conciseness of the words; the fewer the words, the more powerful, to me, is a short story,” said Ms. Rea, remembering that her late husband would say.

“I like the stories I can just sit and read in one sitting.”

Whether they produced such easily digestible stories or not, over the years the $30,000 Rea Award has compiled a who’s who list of winners. Donald Barthelme, Tobias Wolff, Joyce Carol Oates, Paul Bowles, Tillie Olsen, Ann Beattie, John Updike, Stuart Dybek and James Salter are just a few of the names on that list.

And now comes Charles Baxter, of whom the jurors said: “Charles Baxter is a writer of elegant sentences, an expert in the mechanics of dramatic narration, and a master of psychological exile, which is the unexotic but special terrain of the short story. His first book of fiction, the story collection Harmony of the World, published more than 25 years ago, announced and original mind and ironic wit, an all of his collections since (including his recent career-crowning compendium, Gryphon: New and Selected Stores) have revealed similar strengths and concerns” the often suspenseful estrangement within family life’ the homemade spirituality of midwestern eccentric the plight of a cruel economy’s stragglers; the dubious safety of the middle ground. Ordinary madness is revealed then reconsidered. Quietly political and emotionally precise, whether registering the moods and face of strangers or the complex of fond and hateful way American converse, Baxter’s stories have especially shown an acute feeling for the landscape of marriage, childhood, and art.”

Mr. Baxter currently teaches at the University of Minnesota and the Warren Wilson College MFA Program for Writers.

“When Michael started the award, he didn’t really care much about how it got into the press. So he didn’t any want fanfare about the award. He just wanted to encourage writers to write short stories,” recalled Ms. Rea.

This year, despite the milestone, there will be no fanfare about the 25th award; just a commitment to sustain Michael Rea’s legacy into the future as a way of ensuring that the world benefits from what is arguably literature’s finest and most powerful form.

To learn more, see the Web site at www.reaaward.org.